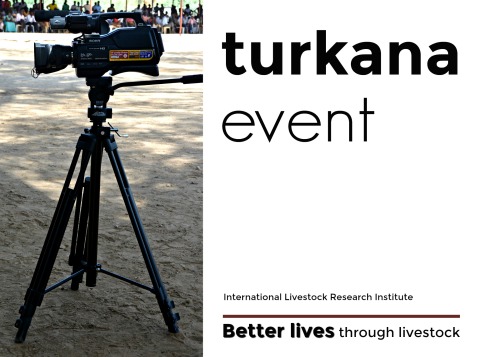 The following excerpts of an opinion piece were written by Andrew Mude, a Kenyan economist who leads an Index-Based Livestock Insurance project at the International Livestock Research Institute (ILRI), in Nairobi, Kenya. Mude’s commentary was originally published by The Standard newspaper (Kenya): Insurance only way to guard against weather-gone-awry phenomenon, 28 Apr 2017. 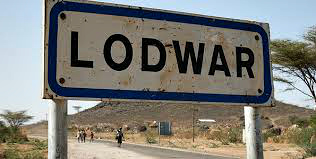 Above: Road sign welcoming visitors to Lodwar, the capital of Turkana County, in northwestern Kenya. A hyper-hot and -arid region (average 250mm rainfall/year, with no rain falling at all some years) and Kenya’s second-largest (after Marsabit) as well as poorest county, Turkana is home to pastoral peoples today and some of the earliest findings of archaic Homo Sapiens (up to 200,000 years ago) of the distant past (photo by Daily Nation).

Somewhat lost in the politics
of President Uhuru Kenyatta’s
visit to Lodwar last month was
the official purpose of his visit:
the issuance of livestock insurance payouts
triggered by the country’s ongoing drought.
—Andrew Mude 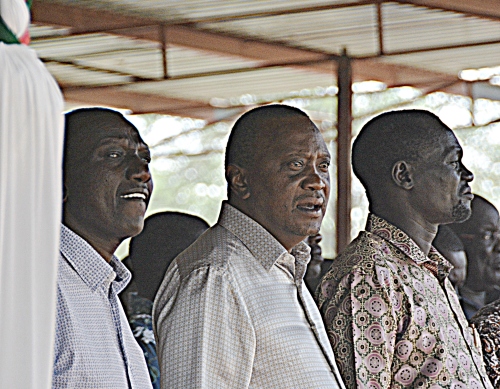 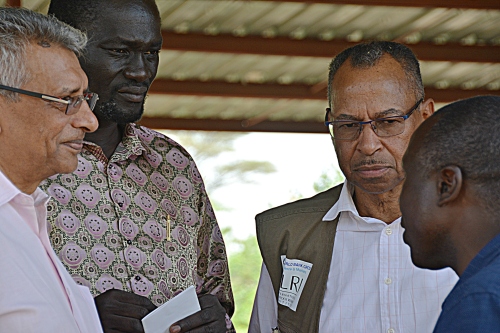 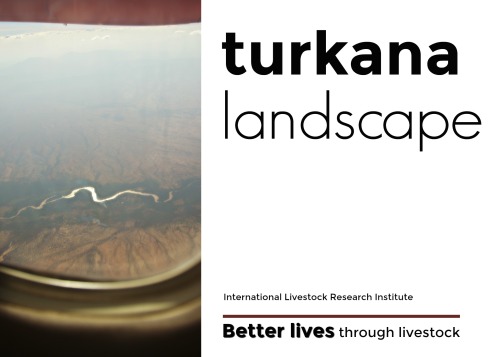 Above: View of Turkana and the Turkwel River from an airplane window.
Kenya’s arid and semi-arid areas cover about 80% of the land surface and
are occupied  by about 20% of Kenya’s population (photo by ILRI/Susan MacMillan).

‘The Turkwel River . . . [flows] from Mount Elgon in the border of Kenya and Uganda to Lake Turkana. . . . The name Turkwel is derived from the Turkana name for the river, Tir-kol, which means translates to a river that “withstands the wilderness”. The Turkwel begins from the lush green slopes of Mount Elgon and the Cherangani Hills, traverses the Southern Turkana Plains, crosses Loturerei Desert near Lodwar and empties to the world’s largest desert lake, Lake Turkana. . . . When the [Turkwel and Kerio] rivers dry up, open-pit wells are dug in the riverbed; these are used for watering livestock and human consumption. There are few, if any, developed wells for community and livestock drinking water, and often families must travel several hours searching for water for their livestock and themselves.’—Wikipedia 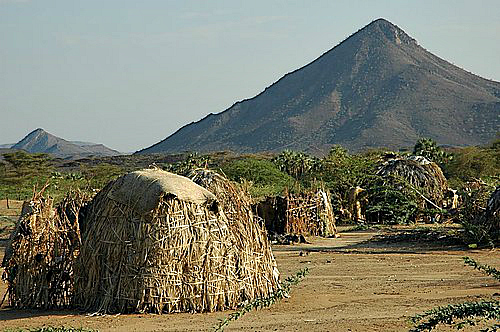 ‘Turkana houses are constructed over a wooden framework of domed saplings on which fronds of the Doum Palm tree Hyphaene thebaica, hides or skins, are thatched and lashed on. The house is large enough to house a family of six. Usually, during the wet season, they are elongated and covered with cowdung. Animals are kept in a brush wood pen.’ —Wikipedia

That was a shame.

We should be focusing our energies
right now on alleviating the suffering
of herders in Kenya’s arid north.
—Andrew Mude

‘The second largest county by size, Turkana has among the highest maternal and infant mortality rates in the country, the lowest school enrolment rates and the lowest life expectancy. Also, the Human Development Index of Turkana is significantly lower than the weighted national average. At this time of the year, people living in rural parts of Turkana County are among the hardest hit by the on-going drought in Kenya. The United Nations and the Government of Kenya approximates that 2.7 million Kenyans are facing acute food shortage and the Government has declared the drought a national disaster. Things are looking up for Turkana County nevertheless. Not least in the reasons for new optimism is the fact that in 2012, the Government of Kenya announced that substantial oil deposits had been discovered in parts of Turkana County. Though it will be a while before the petrodollars begin to reflect in the economy, indicators such as an increase in services and jobs, expansion in activities in the hospitality industry, and increase in the frequency of flights to the county’s main town of Lodwar suggest a bright future. Two vast underground aquifers, storing billions of litres of water, have also been discovered. The aquifers could change the lives of people in the region.’
—Siddharth Chatterjee, Turkana County of Kenya, inspiring hope, 4 Mar 2017 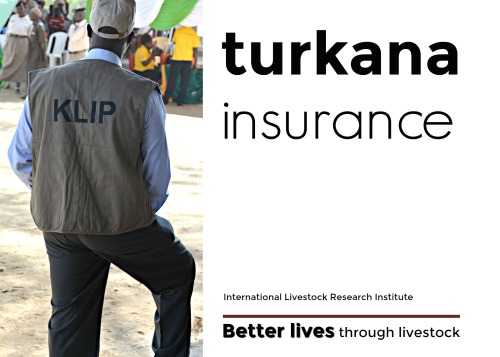 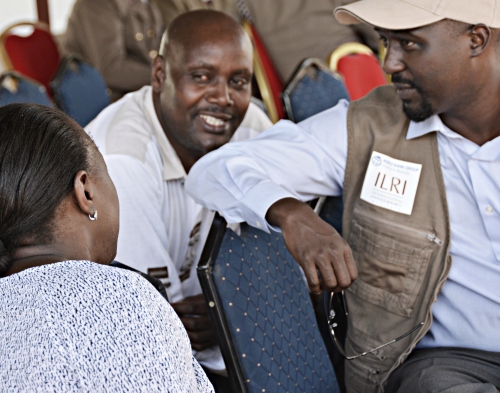 We already have a promising
path forward to mitigate the crisis. 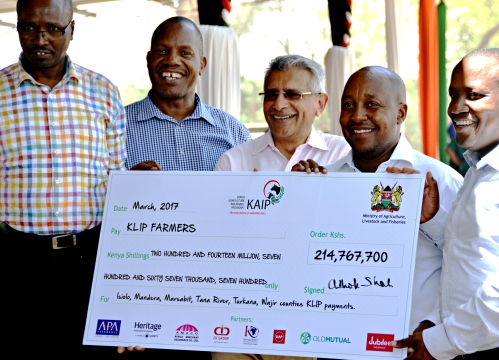 Above: Representatives of the insurance consortium present a cheque to KLIP farmers in Turkana on 8 Mar 2017. KLIP is administered by the Kenya Government through a public-private partnership  involving a consortium of seven local insurers—APA, UAP, CIC, Jubilee, Heritage, Amaco and Kenya Orient Insurance—with the support of a Zurich-based insurer, Swiss Re
(photo by ILRI/Susan MacMillan).

That was really good to see.

But it’s not nearly enough.

Over 3 million herding households
in Kenya depend on livestock
as a key source of income and nutrition.

For these Kenyan herders,
drought is an ever-present risk,
accounting for more than 75 per cent
of their livestock losses.

All of these many herding families
could, and should,
benefit from the insurance coverage
offered by KLIP.
—Andrew Mude 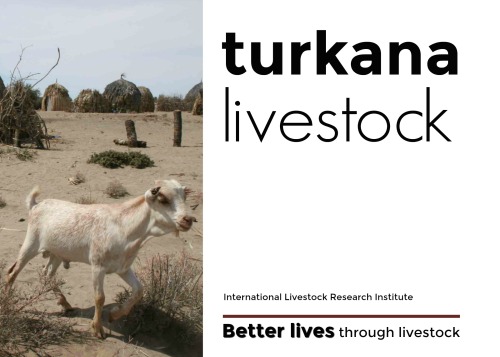 Above: Goat in Turkana (photo by American University).

This innovative product, which uses satellites
to monitor drought conditions
and triggers payments
in the event of severe forage scarcity,
was launched as a pilot in Marsabit in 2010.

It is led by a consortium of partners,
spearheaded by the team I oversee
at the Kenya-based International
Livestock Research Institute (ILRI).
—Andrew Mude 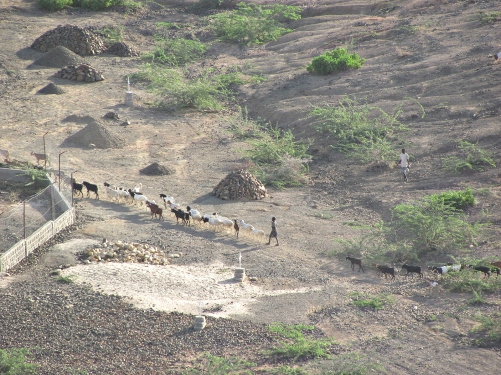 Above: Livestock herding in Turkana (photo by Taylor and Leigh Ann Kilpatrick).

Life in Turkana County revolves around livestock. Cattle, camels, donkeys, sheep and goats are a major source of income for Turkana’s residents. ‘Livestock is an important aspect of Turkana culture. In this society, livestock functions not only as a milk and meat producer, but as form of currency used for bride-price negotiations and dowries. Often, a young man will be given a single goat with which to start a herd, and he will accumulate more via animal husbandry. In turn, once he has accumulated sufficient livestock, these animals will be used to negotiate for wives.’—Wikipedia

The Kenya Government,
through its State Department of Livestock,
should be applauded for its commitment
to expand coverage through KLIP.

But only a small fraction of affected
households are currently covered.

We urgently need to expand this program
to more households because we know droughts
will continue to afflict this region.

And we also know that
under climate change,
droughts are likely to occur
here even more frequently in future.
—Andrew Mude 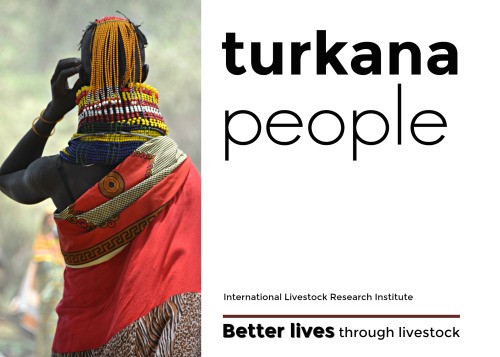 ‘The Turkana are a Nilotic people native to the Turkana District in northwest Kenya, a semi-arid climate region bordering Lake Turkana in the east, Pokot, Rendille and Samburu people to the south, Uganda to the west, and South Sudan and Ethiopia to the north. They refer to their land as Turkan. According to the 2009 Kenyan census, Turkana number 855,399, or 2.5% of the Kenyan population, making the Turkana the third largest Nilotic ethnic group in Kenya, after the Kalenjin and the Luo, slightly more numerous than the Maasai, and the tenth largest ethnicity in all of Kenya.’—Wikipedia

[T]he droughts that hit Kenya
in 2009 and 2011
caused an estimated $12 billion
in losses to the economy,
of which 70 per cent
was due to livestock sector losses alone.

We can see the cost of this tragedy
in people’s loss of livelihood and dignity.
—Andrew Mude 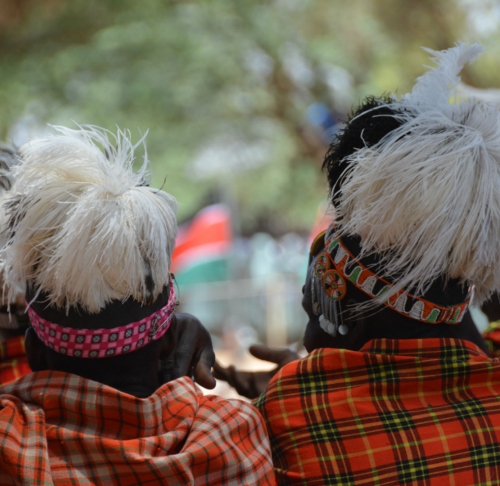 Above: Elaborate clothing and adornment styles of the Turkana people were on display at the 8 Mar 2017 KLIP event in Lodwar (photo by ILRI/Susan MacMillan). 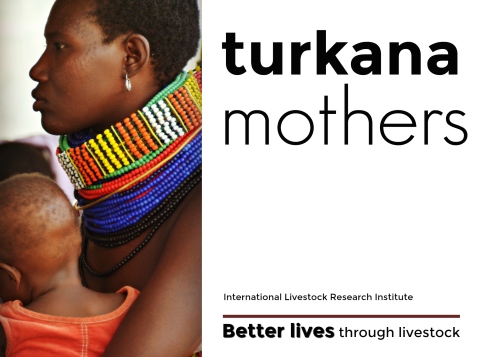 It’s been noted that contrary to the apparent situation in some pastoral groups, Turkana women are not more involved with small stock than with large stock husbandry. Small stock and large stock appear equally the concern of pastoral Turkana of all sexes and ages.

However, ‘Women in Turkana County are usually relegated to the periphery in many areas. They have lower political, social and economic status. In addition, the domestic and social burden mainly falls on the woman. The women are expected to undertake all the domestic chores like fetching water, firewood and looking after the children. The women also have the added burden of feeding their families.’—County Integrated Development Plan, 2013–2017, Turkana County Government.

We can see the cost in their
hunger and malnutrition,
particularly for young children, for whom
the costs of such early malnutrition
endure throughout life,
reducing their cognitive abilities
and productive contributions to society.
—Andrew Mude 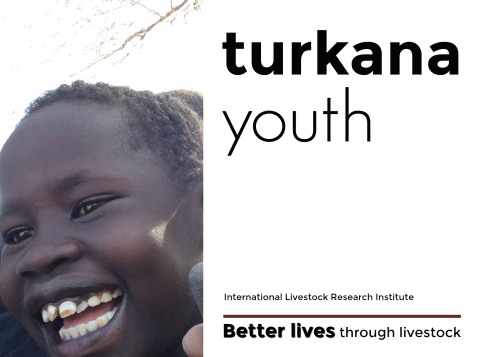 Above: Turkana youth (photo by ScoobyNoodles).

‘Turkana children usually look after sheep and goats, although some families take their children to schools. About 122,000 pupils are currently enrolled in the county’s 202 primary schools, with another 48,000 students attending high schools.’—Kenya Information Guide 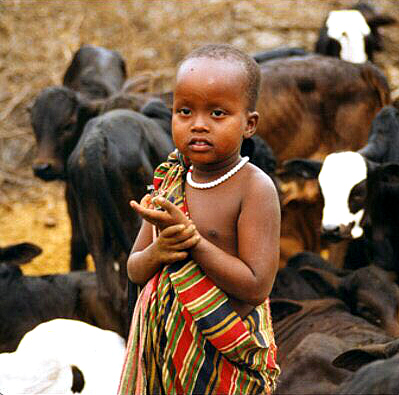 Above: Turkana child with livestock (photo by Turkana County News).

Offering insurance
to more herding families
is part of the answer.

The government needs
to increase funding to KLIP
and put in place transparent policy
and operational frameworks
that can help catalyse
investment from the
increasing number of
private insurance companies
and other commercial
service providers interested in partnering
with this insurance programme.
—Andrew Mude 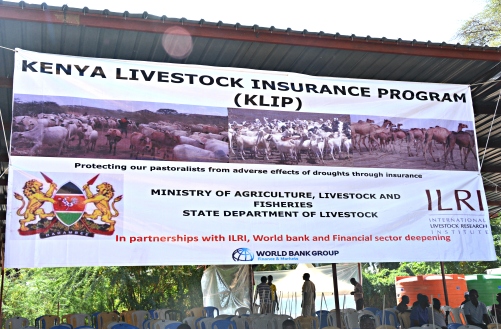 Above: The Kenya Government’s Kenya Livestock Insurance Program (KLIP) signage at the KLIP event in Lodwar on 8 Mar 2017 (photo by ILRI/Susan MacMillan).

To ensure sustainability,
the government should consider
partially subsidising the insurance premiums
of all interested buyers
rather than, as at present,
paying the full premium amounts
for a very small selected group of herders.
—Andrew Mude 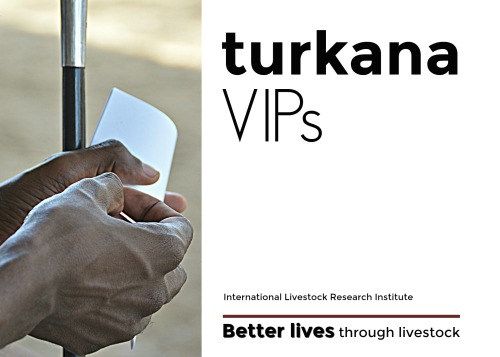 We have seen bipartisan support for KLIP,
and its recent successful payouts
prove its value to Kenyans.

[T]his is one program that
all political parties and constituencies
can and should support.
—Andrew Mude 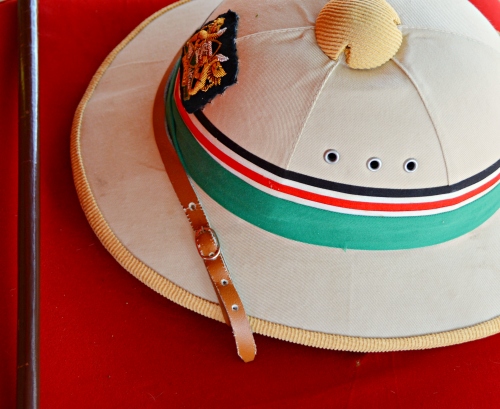 I commend the concrete progress
made by the current Government under
the Kenya Livestock Insurance Programme.

Let’s build on this momentum
and scale up this livestock insurance
across all our arid lands.
—Andrew Mude 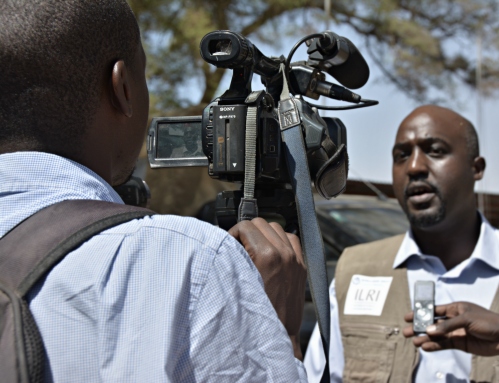 Above: IBLI Project Leader Andrew Mude gives interviews to journalists
at the KLIP event in Lodwar on 8 Mar 2017 (photo by ILRI/Susan MacMillan).

Read the whole commentary by ILRI’s Andrew Mude in The Standard:
Insurance only way to guard against weather-gone-awry phenomenon, 28 Apr 2017. 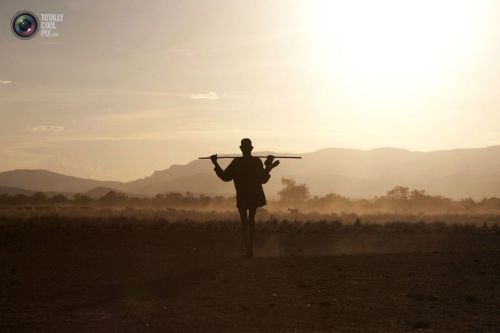 Above: Livestock herdsman in Turkana (photo by Siegfried Modola/Reuters).