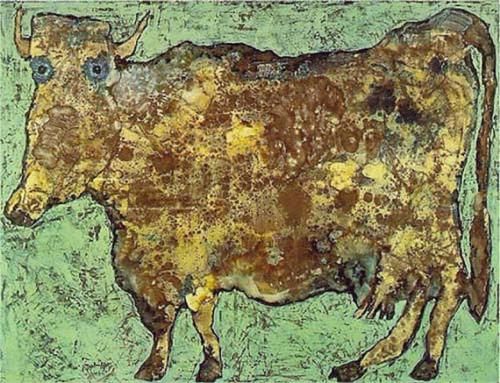 The Cow with the Subtile Nose, by Jean Dubuffet, 1954.

‘. . . According to Reuters, the Gates Foundation will pump $40m into research for higher-yielding dairy cows, as well as chickens that lay better quality eggs, livestock vaccines and “supercrops” that can withstand droughts or disease.

‘These will help farmers in need across the globe—the International Livestock Research Institute says that there are 750 million people in low and middle-income countries who depend on livestock (cattle, sheep and goats) farming, which acts as a source of both nutrition and income.

“What that means in this context is helping poor farmers get as much as possible out of their animals.”

‘The input from Gates will be part of a $174 million agricultural project with Britain’s Department for International Development. Through the supercows and supercrops and superchickens, the project hopes to help the poorest small-scale farmers across Africa and South Asia.

“For more than a billion people living in the poorest countries, agriculture and livestock are a lifeline out of poverty. The science and research being led by the great minds here in Edinburgh are making huge strides in improving the health and productivity of livestock.”

[Gates] added: “The impact per dollar is super-high in this [genetics] area. “You can have a cow that is four times as productive with the same survivability. We could justify this on economic or health impacts—but we get both.” 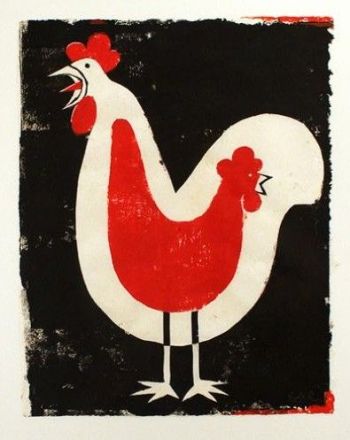 The Chicken Within, by Edel Rodriguez.

‘. . . I’ve met many people in poor countries who raise chickens, and I have learned a lot about the ins and outs of owning these birds. It’s pretty clear to me that just about anyone who’s living in extreme poverty is better off if they have chickens.”

Read a curated collection of tweets and pictures about this new livestock funding from the BMGF and UKaid/Department for International Development:

Livestock were in the limelight last Friday when Bill Gates dropped by the University of Edinburgh on his way home from Davos. Gates & the UK’s Penny Mordant announced new funding for livestock research for developing countries. https://twitter.com/i/moments/957876424710467586

Read other news clippings about this new livestock funding from the BMGF and UKaid/Department for International Development:

Gates in bid to combat world poverty through agriculture
stv.tv | 01/27/2018
Microsoft founder Bill Gates has announced funding for innovative agricultural research in Edinburgh. The philanthropist joined International Development Secretary Penny Mordaunt for an event with staff and students at the University of Edinburgh.

ILRI to help Busia improve dairy breeding, increase milk supply
http://www.the-star.co.ke | By Jane Cherotich | 01/27/2018
Busia county needs 50,000 litres of milk a day but only produces 30,000 and imports from Uganda and neighbouring counties. To increase production, the Busia government has partnered with the International Livestock Research Institute to improve breeding.

Scottish livestock scientists to lead £4m African research project
http://www.thescottishfarmer.co.uk | Gordon Davidson | 01/26/2018
AN AGRICULTURAL research project applying Scots know-how to African livestock disease problems has been boosted by £4million of UK government funding. The investment from the Department for International Development was announced by the Secretary of State for International Development, Penny Mordaunt, during a visit to the University of Edinburgh today (Friday January 26).

Bill Gates visiting the university today to discuss agricultural research and innovation
http://www.studentnewspaper.org | Mei Futonaka | 01/26/2018
Bill Gates will be visiting the university today to discuss how research and innovation are advancing the lives of communities in Britain and the poorest parts of the world. International Development Secretary, Penny Mordant, will join Gates in holding a discussion with staff and students on the matter of agricultural research improving the work of…

£4m for research to aid sustainable livestock production in Africa
http://www.sruc.ac.uk | 01/26/2018
Research to improve the health and productivity of farmed animals in tropical climates has received a £4 million boost from the UK Government. The investment from the Department for International Development (DFID) was announced by the Secretary of State for International Development, Penny Mordaunt, during a visit to the University of Edinburgh.

£118m funding boost for life-saving research
http://www.thenational.scot | Greg Russell | 01/26/2018
SCIENTISTS at a Scottish university are being given £90 million in UK Government funding for their cutting-edge research into developing genetically modified crops that are more nutritious and flood and drought resistant.

Bill Gates to fund agriculture research to fight poverty
http://www.scotsman.com | Andy Shipley | 01/26/2018
Pioneering research in Edinburgh to end world hunger has been backed by American billionaire Bill Gates. The Microsoft founder and philanthropist flew into the city yesterday to pledge more than £28 million to the Edinburgh University work.

Bill Gates in Edinburgh for ‘cutting-edge’ crop announcement – Sunday Post
http://www.sundaypost.com | Conor Riordan | 01/26/2018
BILL GATES is to visit a Scottish university for the unveiling of a new “cutting-edge” crop research project. The Microsoft founder will be on a joint visit to the University of Edinburgh when the announcement is made.

Event celebrates UK innovations in agriculture
http://www.ed.ac.uk | 01/26/2018
Bill Gates and Government Minister Penny Mordaunt visited the University’s Easter Bush campus to showcase how communities worldwide are being helped by innovative agricultural research. The co-chair of the Bill & Melinda Gates Foundation and the UK International Development Secretary discussed how their organisations invest in projects based in Edinburgh which are improving the health…

UK aid backs ground-breaking British research into ‘super-crops’
http://www.gov.uk | 01/26/2018
Pictures and videos are available to use here UK scientists are leading new cutting-edge research to allow farmers to grow crops that are more nutritious, more resistant to disease and better able to withstand severe floods or drought in Africa, in addition to developing medicines to protect farmers’ livestock from devastating disease.

Bill Gates pumps millions into quest for a supercow
http://www.thetimes.co.uk | Tom Whipple | 01/26/2018
Give a man a fish, and he will eat for a day. Give a man a hybrid supercow with the udders of a heifer and the ruggedness of Masai cattle, and he will eat cheese for a lifetime. Or a cow’s lifetime at least.

Gates footing bill for Scots research into hardier crops
http://www.express.co.uk | David Scott | 01/26/2018
Yesterday, the billionaire joined International Development Secretary Penny Mordaunt for an event with staff and students at the University of Edinburgh. The Bill And Melinda Gates Foundation has funded research into improving livestock health.