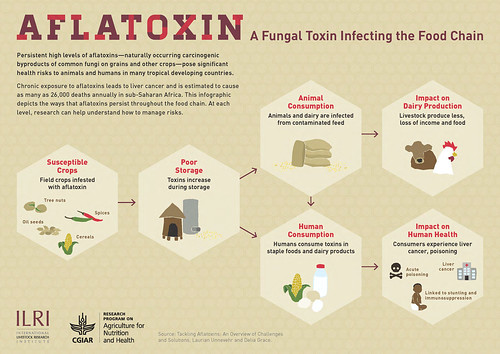 ‘The rise of local agricultural industries (agro-industrialisation) has had both positive and negative effects on the economy. . . .

‘Prior to 2005, most studies were conducted after serious outbreaks of aflatoxin poisoning where several people died, especially in 2004. . . .

‘A 2006 study titled ‘‘Aflatoxin B1 and M1 Contamination of Animal Feeds and Milk from Urban Centres in Kenya’’ by Kang’ethe and Lan’ga, which was funded by the University of Nairobi’s Department of Public Health, Pharmacology and Toxicology and the Division of Public Health at the Ministry of Health, established that 72 per cent of the milk from dairy farmers, 84 per cent from large and medium scale farmers and 99 per cent of the pasteurised marketed milk had aflatoxin levels that exceeded the World Health Organisation (WHO)/Food and Agricultural Organisation (FAO) levels that more often than not cause serious diseases. . . .

‘In 2007, the United States President’s Emergency Plan for Aids Relief and the Centres for Disease Control and Prevention (CDC) funded Ellen Yard and others to look into aflatoxin exposure in Kenya. [T]hey detected high serum aflatoxin B1 in 78 per cent of the randomly selected serum specimens. The study concluded that aflatoxin exposure is a public health problem throughout Kenya, and it could be substantially impacting human health. Wide-scale, evidence-based interventions are urgently needed to decrease exposure and subsequent health effects.

‘The most recent research led by Johana Lindahl of the International Livestock Research Institute (ILRI) basically validates the many other studies in the country. . . . The study findings show high aflatoxin levels in maize, sorghum and milk fed to children in Nairobi’s poorest regions . . . .

‘. . . [A]nother study by Trucksess and Wood in 1994 . . . recommended that in order to prevent future aflatoxicosis outbreaks, it was necessary to explore public health interventions that promote effective production, storage and processing of homegrown and commercial maize.

‘In addition, surveillance that monitors aflatoxin concentrations in food and incidence of acute jaundice in humans may prevent widespread outbreaks of acute aflatoxicosis. . . .’

Read the whole article by Bitange Ndemo, an associate professor at the University of Nairobi’s School of Business, in Business Daily (Kenya): Plug quality loopholes in food supply chain, 12 Oct 2016.