A monthly round-up of recent articles, blog postings and tweets about livestock, aid and other topics that may be of interest to ILRI staff and partners, compiled by David Aronson.

In sharp contrast to most of the gloomy reporting on livestock, this leader from The Economist on global meat-eating makes an important, often overlooked point: As Africans get richer, they will eat more meat and live longer, healthier lives.

African swine fever continues to roil China. More reporting from the New York Times here and a dire warning about the potential economic fall-out of the fever from Foreign Policy here.

Facebook has created the most demographically complete map of Africa ever assembled. The new map shows exactly where the continent’s 1.3 billion people live, down to the meter, which could help everyone from local governments to aid organizations.

Plant v. Animal: A meatsplainer from the Washington Post. And another, from the satirical magazine The Onion.

Can lab meat really replace the animal product? And should it? Not only are there still multiple hurdles to overcome, but lab-derived meat may not provide all the benefits its more enthusiastic proponents promise. More here, from a molecular biologist, on the metabolic intimacy between animals and humans. The take-away: ‘Lab-grown meat as currently constituted offers a cotton-candy bedtime story about making a different world through food. Unfortunately, unless the logics underlying its production change, cellular agriculture is going to give us the same fluff we already have.’

Another American fast-food chain is rolling out a vegan meat alternative: Taco Bell has joined Burger King with a new vegan meat taco.

This is a first-rate explainer on the work being done to develop a new vaccine against Rift Valley fever, and why a cross-species vaccine is key. How do viruses jump species, anyway? An explainer on how animal viruses come to infect humans: While humans are constantly exposed to animal viruses, those that can successfully infect and transmit between humans are exceedingly rare.

A new estimate of cow emissions suggests we’ve been underestimating the global (that is, non-Western) contribution of cattle to total GHG emissions.

This is an intriguing podcast from a Kenyan journalist on agriculture and food security. The latest episode is on whether Climate Smart Agriculture can solve Africa’s perennial food security problems.

Cave painting of camel and rider from the Acacus Mountains in the Sahara.

A nice profile from DR Congo on how a mother of nine has broken through the stereotype that butchers be men—and raised her large family on her earnings. (In French.) And here is a profile of a Kenyan couple in Meru County who are running a 2,700-pig empire. And a profile of the small but growing vegetarian and vegan community in Nigeria, in part among people concerned that pastoralism is fueling conflict in the northern part of the country.

How a local aid worker is trying to keep the peace among pastoralist communities in northern Kenya, as resources dwindle and drought intensifies.

The Ugandan press is reporting that 3.5 million Ugandans face starvation due to drought. Drought has killed 64,000 animals in Namibia in the past six months. Kenya is facing the worst drought in 38 years, says the Daily Nation, putting more than 500,000 children at risk of malnutrition. The government says that even if it rains now, farmers will not make any meaningful return from their farms because the planting season is already over. Kenya’s Star newspaper says that the drought is the worst since 2011, and that 2.6 million people are experiencing crisis levels of food insecurity.

Facing the worst drought since 1972, farmers in India, many of them grandparents whose adult children have abandoned farming, have moved into ‘cattle camps’, living and working with their livestock in makeshift tents.

Intercommunal conflicts are rippling through Africa’s Sahel—as last month’s massacre of Fulani shows—and have now reached Burkina Faso: ‘Though communal conflicts over land, water, and other resources are not uncommon here, Burkina Faso has previously been known in the region for peaceful coexistence between different religious and ethnic groups.’ Some similar reporting from Chad: ‘In a territory where almost everyone seems to have a gun — a legacy of rebellions launched from eastern Chad and of the brutal conflict in Sudan’s Darfur — squabbles over grazing land and trampled crops swiftly lead to violence.’

Two more longform pieces on conflict in the Sahel: This one, from the Financial Times, explains why Western nations are so concerned about Niger: ‘With the disappearance of the Libyan state, Niger is now the border with the west,’ Mr Moutari says. ‘If Niger falls, there is nothing.’ This one, from Le Monde, focuses on the ethnic dimensions of conflict in Mali, where the Peul people have become targets of ethnic cleansing. (In French.)

In positive news from the region, Malian pastoralists are relying increasingly on satellites and mobile technology to find water for their herds.

It turns out the beloved giant panda was originally a carnivore—and retains a meat-eater’s digestive system, even though the gentle creatures mostly eat bamboo. So what happened? It turns out that, at least from a biochemical point of view, ‘Bamboo looks like a kind of meat.’

Global advocacy around nutrition and hunger has often, successfully, focused on stunting. But what is stunting, exactly—and why should we be concerned about it? An IFPRI researcher explains.

An interactive New York Times article on food and climate change says that all of us (or at least all of us well-off western consumers) should eat less meat and dairy.

A traditional Chinese remedy for anemia, reproductive issues and insomnia uses donkey hides—and the demand for the hides is growing so high that it is now endangering the common African donkey.

A generally laudatory review of the EAT/Lancet Commission report on global health contains this important caveat: ‘There is no meaningful discussion of the current affordability of health diets or the extent to which the proposed transformation can be implemented in a manner to ease huge inequities in access to nutritious foods.’

Goats: What aren’t they good for? (Part n of an ongoing series). In Zimbabwe, they’re being used to pay for school fees.[1]

Africa as a continent continues to suffer from the world’s highest per-capita rate of food-borne illnesses. A new report this month from the World Bank’s Global Food Safety Partnership points to one reason why: Much of the funding for food safety efforts on the continent come from Western donors — and most of those efforts concentrate on safety standards for foods exported to other countries.

This little GIF shows how many animals are killed every minute for human consumption. And here are a couple of graphics on the rise of livestock in the post-paleolithic age. 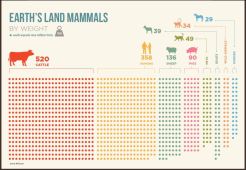 A study of 6,794 Gates Foundation proposals found that female proposals are scored lower than male ones, even with a blind review process in place. A key reason is that men use more broad descriptive words, women narrow technical ones, and reviewers prefer the former.

An article from Melinda Gates on how she learned to see agriculture (and everything else) as a gender issue: ‘While making a living from a small family farm plot is hard for anyone, the data tells us that it’s especially hard for women.’

Scientific American has a long article on the continuing scarcity of black women in science and tech—and some recommendations for improvement.

An argument that the biggest obstacle standing in the way of gender equality in sub-Saharan Africa is not culture or tradition, but poverty.

American cattle ranchers are up against the ropes, and lobbying for mandatory country-of-origin labeling for the meat they produce. Also, why are American men obsessed with steak? How, to put it in academic terms, did beef become gendered?

Why is aid work so jargon-laden?  A good take on a perennial topic: ‘Why is it that the people who work to improve the most basic human needs — clean water, food, education — sometimes can’t seem to talk like human beings?’ And here is some good advice from the Center for Global Development: Write clearly. Use simple words and short sentences. And don’t do it just to help the reader, do it for yourself: Two new studies show that readable economics papers get cited more often. Also, some good advice on how to use Twitter: Be generous, professional, and courteous–and don’t get emotional!

Finally, here are some  16th century cows singing from a songbook on a lectern:

[1] (I wonder if my daughter’s expensive American college would accept them? At current rates, I would have to drop off a herd of about 300 each semester on the college green.)