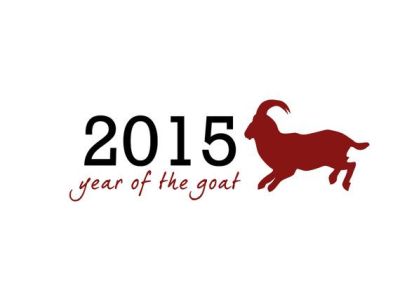 As the Chinese New Year, which starts on 19 Feb 2015, will bring us the Year of the Goat (or Sheep or Ram), we thought we would highlight this recent tidbit from the Washington Post Wonkblog.

‘There were 2,621,514 goats in the United States as of 2012, the year of the most recent USDA Agricultural Census. If America’s goats were their own state, its population would be larger than that of Wyoming, Vermont, D.C. and North Dakota — combined. This is what all those goats look like on a map.’ 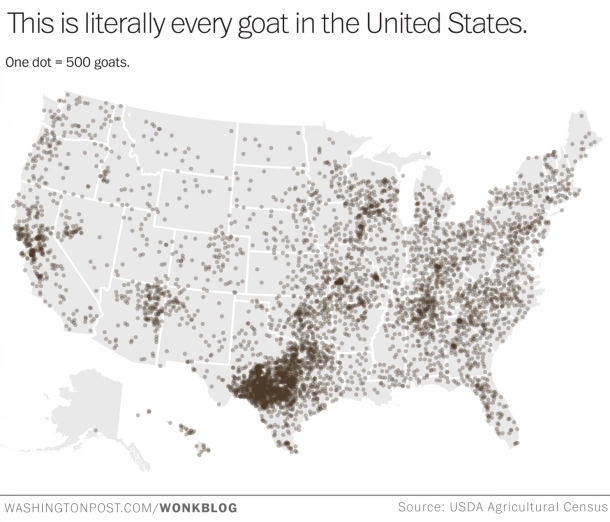 ‘Now. This may not be the World’s Most Important Map. But consider this: you might say that goats are having a moment. NPR’s [National Public Radio] newish blog on ‘stories of life in a changing world’ is called ‘Goats and Soda’, a nod to the animal’s ubiquity in many parts of the developing world. Closer to home, goats are being used in urban areas to trim grass and control brush. . . .

‘Goat meat is a mainstay of many African, Asian and Caribbean diets. As more people from those regions settle in the U.S., we’ll see goat enter the American cooking mainstream. As it is, a Google search for ‘goat recipes’ returns 19.3 million results.

‘There are currently 3.2 million YouTube videos relating to goats. Last year saw the release of the video game Goat Simulator. 28 million people have watched this video of goats yelling like humans.

In short, goats are pretty much everywhere.

Read the whole article by Christopher Ingraham in the Washington Post Wonkblog: Map: Literally every goat in the United States, 12 Jan 2015.