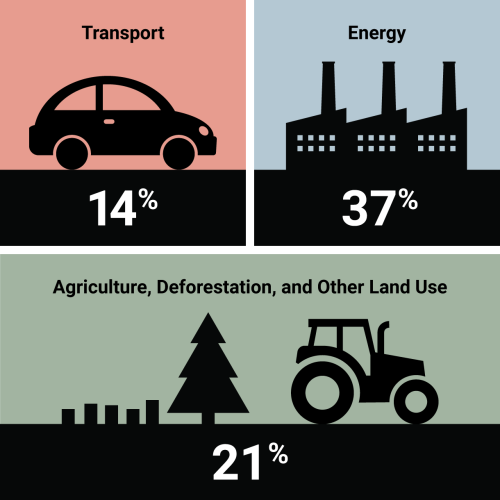 Share of global greenhouse gas emissions (University of Minnesota’s Institute on the Environment, 2016).

The following is an unusually sane and well communicated multimedia primer on the sustainability of the global food system. Food Matters, republished here in full with permission, is published by the Institute on the Environment at the University of Minnesota. It is the first in a series of Environment Reports and is a collaboration between an international group of scientists, writers, and designers to combine incisive narratives about environmental challenges, backed up by cutting-edge data. Funding for this project was largely provided by a grant from the Mosaic Company, with additional funding for research and analysis provided by the Gordon and Betty Moore Foundation. Do check out the full multimedia version, which has sources, links, images, more interactive graphics and other materials missing here. Enjoy!

Agriculture, deforestation and other land use
account for roughly 20 percent of all GHG emissions

Since the start of the Green Revolution, the productivity of the global agricultural system has more than doubled, improving food security for a growing population and meeting dietary demands of an increasingly wealthy world. This astounding productivity has also imposed environmental costs. While global agriculture faces a number of challenges, the most surprising challenge to food security may come from agriculture’s impact on our climate.

Right now, the world’s agricultural sector, which in this report refers to management and land clearing related to agriculture, accounts for about one fifth of total greenhouse gases. That’s more than all of the world’s cars, planes, and trains combined. Emissions from agriculture and deforestation are three times greater than emissions from the global building sector, and equal to all industrial emissions. In fact, energy production is the only sector that has a higher share of emissions (37 percent).

Despite agriculture’s central role in changing the global climate, there are promising opportunities for mitigating emissions and reducing the demand for high-emissions food in the first place. Developing a global food system that both achieves food security and reduces agriculture’s environmental impact is one of the foremost challenges of our time.

We’re trading enormous greenhouse gas emissions for food to feed the planet. Between clearing land to farm and the farming itself, that’s 21 percent of global emissions—much more than the carbon spewing out of every car, plane, and train on Earth.

Agriculture is responsible for about half of global methane emissions. Methane is 26 times stronger as a GHG than CO2. Ruminant livestock, including cows and sheep, digest their food through enteric fermentation, which produces methane. The result: Globally, about a third of agriculture’s methane emissions come from livestock. Burning biomass to prepare fields is another methane-maker, as is applying manure to fields.

Another major methane source? Rice grown in paddies, where bacteria break down biomass submerged in the fields. Methane emissions from irrigated rice fields account for about 11 percent of emissions from agricultural management.

Sixty percent of all anthropogenic N2O emissions are from agriculture. Nitrous oxide emitted into the atmosphere is a major GHG because it is 300 times more effective at warming than CO2. 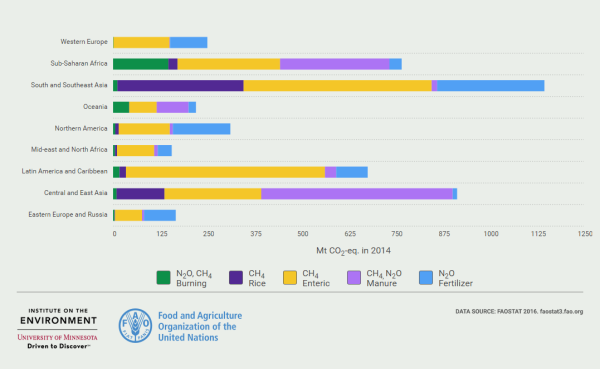 Tropical forests and savannas comprise most of the planet’s remaining land that is suitable for growing crops. Because tropical forests and grasslands are dense with trees and plants, clearing them releases much more carbon than in temperate areas.

At the same time, tropical croplands tend to be less productive than their temperate counterparts. In fact, newly cleared tropical cropland releases about three times more carbon per ton of crops produced than similar cropland in temperate parts of the world.

While non-agricultural emissions of tropical countries account for just 14 percent of global GHGs, when emissions from deforestation are included, the emissions add up to a third (31 percent) of the global total.

Today, most countries in predominantly temperate areas, including the U.S. and China, do not have agricultural emissions due to deforestation. Native forests on suitable land for farming were cleared long ago. However, wealthier countries contribute to land clearing indirectly, as their demand for crops or livestock often drive deforestation in poorer countries.

While different strategies are appropriate to particular world regions, some promise higher mitigation of agricultural GHGs. Practices that intensify production on existing pasture and croplands have the highest potential because they avoid deforestation. 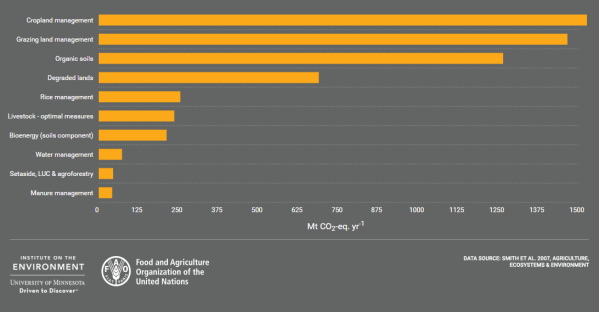 Changing demand for food is just as critical

Our best estimates are that global food demand will increase between 60 and 100 percent by mid-century. Even if we meet this demand through sustainable intensification of agriculture, nearly all remaining forests and grasslands in the tropics that are suitable for agriculture would need to be plowed up.

So, a focus on emissions from agricultural production simply won’t be enough.

Recent work suggests that we’ll need to shift global demand for food calories through changes in our diets and reducing food waste. Shifting demand will also require careful attention to differences in food access between developed and developing countries, or within a country, to ensure strategies are equitable.

If we depend on current yield trends alone to meet future demand for food, we will need the entire global emissions allowance for keeping global average temperatures below 2°C. That would leave virtually no emissions for all other sectors, including energy production, industry, and transport.

Even closing yields gaps and halving food waste will leave less than half of the global GHG budget. Only a combination of all strategies—sustainable intensification, food waste reductions, and dietary change—keep agricultural emissions within safer limits. 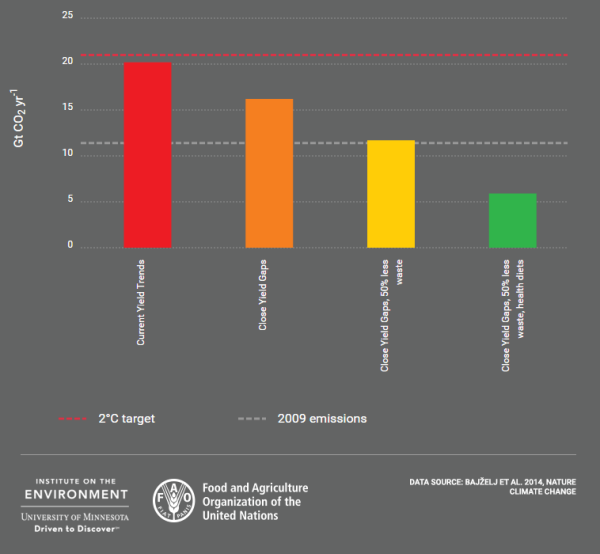 Easing agriculture’s impact on our climate won’t be easy, but reducing agricultural emissions needs to be in the mix of strategies for avoiding dangerous levels of climate change. Even if all sectors other than agriculture reduce their emissions to the maximum, we will not be able to meet the goal of limiting a global average temperature increase below 2°C. An estimated target for the mitigation needed in agriculture is 1 GT CO2eq/ yr by 2030, which is roughly equivalent to the emissions from all cars on the road in the U.S. today.

Doing so will demand shifts in thought and practice throughout the food system. Here’s a sampling of specific solutions.

Deforestation tips the atmospheric balance further toward greenhouse gases, but farming demands land, so people often trade forest for fields. The challenge, particularly in the Global South, is to limit logging while still producing enough crops to feed growing populations. In Brazil, commitments by companies have enabled agricultural intensification, and contributed to a sharp drop in deforestation.

Rice paddies are a key source of food. They’re also a key source of methane. To clamp down on that potent greenhouse gas during the growing season, cultivators can periodically drain their fields. During the off season, keeping soil dry will help.

Not all solutions rely on loggers or farmers changing their ways. You can be part of the fix, too. Demand-side approaches include reducing food waste and shifting toward diets with less meat—both of which would require fewer greenhouse gas emissions from agriculture.

Credits, with all authors from the University of Minnesota’s Institute on the Environment except where noted
Barrett Colombo, Paul West, Pete Smith (University of Aberdeen), Francesco Tubiello (Food and Agriculture Organization of the United Nations), James Gerber, Peder Engstrom, Andrew Urevig and Eva Wollenberg (CGIAR Research Program on Climate Change, Agriculture and Food Security and the University of Vermont).