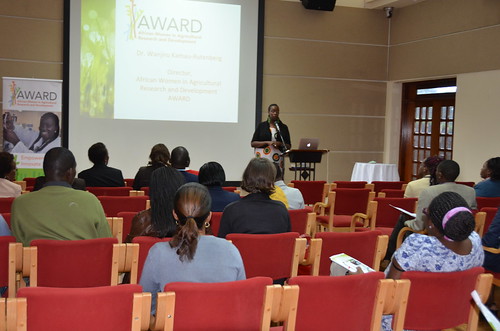 Wanjiru Kamau-Rutenberg, the new director of African Women in Agricultural Research and Development (AWARD) gave a seminar on the vision for AWARD at ILRI in Nairobi on 25 Jun 2014 (photo credit: ILRI/Samuel Mungai).

Wanjiru Kamau-Rutenburg, the new director (she started in March 2014) of the African Women in Agricultural Research and Development (AWARD) program, gave a brief presentation about her organization at the International Livestock Research Institute (ILRI), in Nairobi, on 25 Jun 2014.

Kamau-Rutenburg said AWARD’s career development program equips top women agricultural scientists across sub-Saharan Africa with the tools and skills needed to accelerate agricultural gains on the continent. AWARD strengthens the research and leadership skills of these talented women through tailored fellowships. She said that AWARD has received many applications for these coveted fellowships over the last five years from across Africa and has awarded 395 fellows in 11 sub-Saharan countries.

The women who obtain the year-long fellowships the following year serve as mentors for the next year’s fellows. AWARD conducts its work in partnership with many other organizations, including the CGIAR Consortium and its centres and initiatives, such as those in Nairobi, where AWARD is based, including ILRI, the Biosciences eastern and central Africa (BecA)-ILRI Hub and the World Agroforestry Centre. AWARD receives its funding from the Bill and Melinda Gates Foundation and the United States Agency for International Development.

Kamau-Rutenburg described AWARD’s two-year mentorship programs (in which 44% of the mentors are men) as programs that nurture as well as mentor its fellows, helping them to further their science skills while also developing their leadership capacities. She took her audience through an ‘empowerment model’ that AWARD has adopted, helping Africa’s women scientists to achieve power within (change), power to do (choice), power over (control), and power with (community).

The AWARD director closed by saying that the program is now preparing for an innovative phase-3 program starting in 2018 and is seeking new donor funding and deeper collaboration with partners. She said AWARD is also looking to help build further agricultural-research-for-development communities such as the Nigerian Women in Agricultural Research and Development (Ni-WARD).

Profile
Wanjiru Kamau-Rutenberg, a Kenyan, founded and served as an executive director of Akili Dada, an award-winning leadership incubator investing in high-achieving young women from under-resourced families. Her work at Akili Dada won her recognition from the US President Barack Obama and the White House as a ‘Champion of Change’ in 2012.

The mother of a five-year-old son has also served as an assistant professor of politics at the University of San Francisco and a lecturer in international relations at Hekima College of the Catholic University of Eastern Africa. Her academic interests centre on the politics of philanthropy, gender, Africa, international relations, ethnicity and democratization, and the role of technology in social activism. She holds doctoral and master’s degrees in political science from the University of Minnesota and a bachelor’s degree in politics from Whitman College.She was named a 2012 White House ‘Champion of Change’, one of the 100 Most Influential Africans by New African Magazine and a 2012 Ford Foundation Champion of Democracy.

‘I am passionate about making this Africa’s century. I’m excited about the transformations that are happening across Africa and particularly here in Kenya. I am also keenly aware that African women have a critical role to play if we are to realize our full potential,’ she says.

AWARD is currently accepting applications for its 2015 fellowships.

This article was written by Doreen Atugah and George Onginjo, interns with the ILRI communications team in Nairobi.