Ethiopian Herald. Last week, Deputy Prime Minister of Ethiopia HE Demeke Mekonnen lauded the critical role that livestock production and processing could play in improving smallholder farmers livelihood as well as reducing rural poverty in Ethiopia. The Deputy Prime Minister said so while making keynote speech at the 40th anniversary of International Livestock Research Institute (ILRI) with a theme: ‘Livestock-based options for sustainable food and nutritional security, economic well being and healthy lives.’ 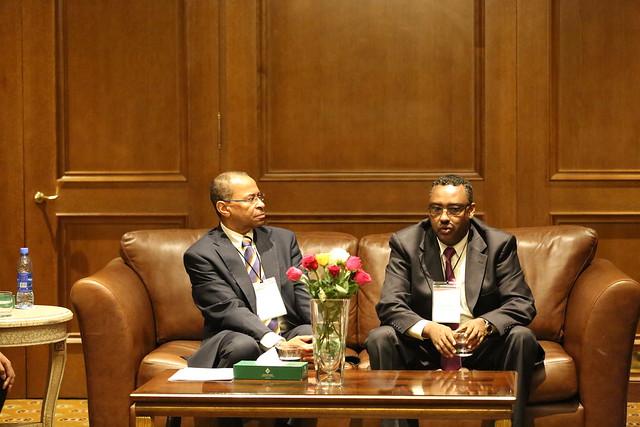 The Deputy Premier said though Ethiopia has the largest livestock population in Africa, it has not benefited from the sector due to various developmental challenges. According to him, direct export revenue of live animals and meat was only 262 million USD while potentially, it could easy be quadrupled.

Therefore, he added that research is critical to sustainably increase productivity through combining improved technologies, enabling policies, organizational and institutional arrangements. As to him, improved productivity coupled with lower prices can improve both availability and accessibility of nutrition from animal source foods for poor consumers.

For the coming decades,he said,smallholder production systems will remain crucial for the development of agriculture in Africa and the developing world. The Deputy Premier went on saying that the critical role of research is to identify pathways for sustainable intensification of small farms-most of which are integrated crop livestock farms.

“The livestock production sector creates employment not only in production but also in trading, processing, and marketing. Employment in the sector is high specially in the informal sector of Africa and Asia which constitute as much as 70 per cent of the market,” he added.

With respect to the challenges that are holding the sector growth back in Africa,Demeke said that climate change is causing serious risks on lives and livelihood of poor farmers and their animals.

He noted that the impact of climate change is of three fold on agriculture. The agriculture itself that is contributing to global warming, the increased temperatures changing the biophysical environment and the push for ‘climate smart’ agriculture creating new set of incentives and constraints for farmers to consider when adopting agricultural technologies and strategies.

“Under Ethiopia’s Climate Green Economic Strategies, it was made possible to successfully curve deforestation from 3 per cent of vegetation cover to 11 per cent with only 15 years time,” he said.

Demeke also noted that a key issue is to develop and implement appropriate strategies and support systems that allow smallholder farmers-specialized livestock keepers and crop-livestock mix to adopt technologies at a scale necessary to make a major difference.

“Capacity development and women participation are key components particularly in job creation for key actors in the current and future agriculture development,”Demeke said.

With regard to the country’s future prospect in the livestock sector Minister of Agriculture Tefera Deribew also said Livestock Development Master Plan has been prepared which will be serving as guiding document of livestock investment for the coming ten years that will be implemented through continued government interventions.

Responding to questions from the press over the illegal trade of livestock across the border, Agriculture State Minister Wend-Yerad Mandefro said, “Due to the market and infrastructural problems most of our cattle are traded informally to neighbouring countries with out generating foreign currency. So animal health, traceability and quarantine service are the key components that need to be put in place to address the challenges.”

International Fund for Agricultural Development (IFAD) President Kanayo Nwanze on his part said as Africa is a continent with 200 million youths, the livestock sector should be taken as an important enabling economic sector to create jobs and businesses.