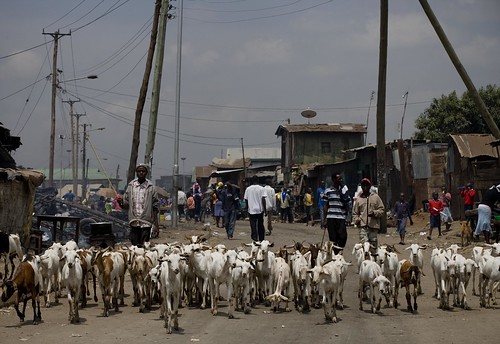 A man herds his goats through Korogocho slum, Nairobi, Kenya (via Flickr/Internews_Nairobi).

From The Economist Explains blog: What zoonotic diseases are, and how to stop them, 24 Mar 2015:

‘New human pathogens arise in two ways. They may evolve from old ones, or they may jump to humanity from other species. The second is the more common route. Infections that jump in this way are called zoonotic diseases, or zoonoses. This seems to have been the route taken by Ebola fever, the latest outbreak of which has claimed more than 10,000 lives.

‘Ebola is suspected of being bat-borne, though that has yet to be proved beyond doubt. Bats also look like the origin of MERS, a viral illness that appeared in 2012 in the Middle East, and SARS, another virus, which burst upon the world from southern China at the end of 2002. HIV, meanwhile, came from other primates. . . . Some older human diseases, too, are constantly replenished from animals. Influenza is an infection of pigs and poultry that subsequently spreads to people. . . .

‘Zoonoses are particularly likely to develop when people and animals live in close proximity to each other. One reason southern China often spawns them (SARS was not unique; a lot of influenza begins there, too) is that the region has a plethora of small farms, in which many species of animal live in close quarters with each other and with human beings. The constant crossing of pathogens between the species involved makes it more likely that one will emerge that can thrive in people.

‘Agriculture is not the only sort of proximity that can foster zoonotic disease. HIV1 is suspected to have started with a hunter who killed a chimpanzee in the forest. In this context, the extensive clearance of forests, at present a serious environmental issue in many poor countries, brings people into habitats they might previously not have visited. That, in turn, is suspected by some to be increasing the amount of zoonotic disease.

‘All this suggests that disease-surveillance, which currently concentrates on people, needs to be expanded to look at animals as well. That is beginning to happen. . . . [A]s in all battles, forewarned is forearmed.’

‘Zoonoses—diseases transmitted from animals to people—seem to be becoming more serious. It is hard to be sure, since the huge fall in worldwide mortality since 1950 makes comparisons hard. But according to Delia Grace of the International Livestock Research Institute in Nairobi, zoonoses cause a fifth of premature deaths in poor countries. The 13 most severe, including brucellosis and leptospirosis (bacterial infections transmitted by body fluids), as well as bovine tuberculosis and rabies, lead to 2.4 billion cases of illness and 2.2m deaths a year, more than HIV/AIDS and diarrhoea.

‘Intensive farming is one cause. Animals crowded in unsanitary conditions are more likely to get diseases and transmit them to humans. The doubling of the global meat trade in 20 years has been concentrated in just nine countries. That cuts the chance of transmission, but means that a disease that crosses into people is likely to do more harm. . . .’

Graphic from the African Population and Health Research Center.

An Urban Zoo research project in Kenya (more formally called ‘Epidemiology, Ecology and Socio‐Economics of Disease Emergence in Nairobi’) is tracking pathogen flows in and around Kenya’s capital city.

Urban Zoo researchers are investigating mechanisms leading to the introduction and subsequent spread of pathogens into urban populations through livestock commodity value chains. The focus of the project is on livestock as sources of these pathogens because emerging diseases are likely to be zoonotic in origin (that is, able to spread from animals to people) and because livestock pathogens, through the close interactions between livestock, their products and people, are at high of risk crossing the species barrier.

The focus in this project is on Escherichia coli, an exemplar of many potential emerging pathogens, which exists in a diversity of hosts, in the environment, in food, in waste, etc. The project takes a ‘landscape genetics’ approach to understanding E. coli distribution and spread, with a view to understanding how this is affected by environmental and socio-economic factors. The project includes a public health component investigating the etiology of diarrhoea in children in low-income settlements, centred on the Korogocho and Viwandani slums, part of the Nairobi Urban Health Demographic Surveillance System, a platform investigating links between urban poverty and health, which is project of the African Population and Health Research Center.

The Kenya Zoonotic Disease Unit is a government body of experts from the health and livestock ministries with the mission of establishing and maintaining active collaboration at the animal, human, and ecosystem interface towards better prevention and control of zoonotic diseases.

In case you missed this New Scientist article last year . . . .

‘The Dandora landfill site in eastern Nairobi is a monument to the Kenyan capital’s runaway growth; a junk monolith built by the city’s 3 million citizens.

‘On its rim is Korogocho, an informal settlement of tens of thousands of people that, like the dozen other such slums in the city, doesn’t officially exist. More than 60 per cent of Nairobi’s population live in these makeshift suburbs hammered together from scraps of corrugated iron.

‘They house the hundreds of thousands of people who flock to the city annually, pulled by the promise of work. By 2025, the United Nations predicts that Nairobi will be home to more than 6 million people, the majority of whom will end up in areas like Korogocho that lack basic amenities such as sewers.

‘The people of Korogocho rely on natural waterways for washing and waste disposal, and many also keep livestock in close proximity to their living quarters. In the back yard of one of the shacks, James Akoko and James Macharia try to hold a pig steady for long enough to take blood. Akoko, from the International Livestock Research Institute (ILRI) in the city, and Macharia, from the University of Nairobi, are searching for pathogens such as Escherichia coli, Campylobacter and Salmonella, which can infect humans as well as animals.

‘They are here because the cramped, unsanitary conditions are a breeding ground for such bacteria. If they get into the food chain, the results can be dire. . . .

‘By identifying where pathogens originate and concentrate along the food chains, Akoko and Macharia’s team hopes to make such outbreaks less likely. “The way you design your city and the way you structure your food system can play into a policy to prevent disease emergence,” says epidemiologist Eric Fèvre of the University of Liverpool, UK, who has been seconded to the ILRI to head the international mapping effort.

‘We’re redrawing the map of Nairobi, not based on geography but on the connectedness of animal and human populations, in terms of the bacteria that they share.—Eric Fèvre

‘To this end, Akoko and Macharia are visiting livestock owners across the city’s slums, taking blood and faecal samples from their animals to sequence for microbial DNA. Keeping livestock in the city is technically illegal, so the pair have to rely on a local knowledge rather than official records to locate potential subjects.

‘. . .  To trace the meat’s path, the team also carry out interviews and test samples at abbatoirs, markets and restaurants across the city.

‘So far, the effort has revealed that Nairobi’s food system is massively diverse, with meat and dairy products produced, sold and consumed across socio-economic boundaries. . . .

‘It is estimated that more than 75 per cent of diseases that have emerged over the past 20 years originated in animals. Often the jump to humans is a fluke – someone has contact with an infected animal, say. But underlying this, says Fèvre, is urbanisation and ecosystem change, exactly the kind of process taking place in Nairobi. . . .

‘”If urbanisation really is the process that will result in the next emergence event,” Fèvre says, “understanding how those events come to be is really important.”‘

Read the whole article by Peter Guest, Mapping the web of disease in Nairobi’s invisible city, which appeared in print under the headline Mapping Nairobi’s disease flashpoints, 28 Aug 2014.