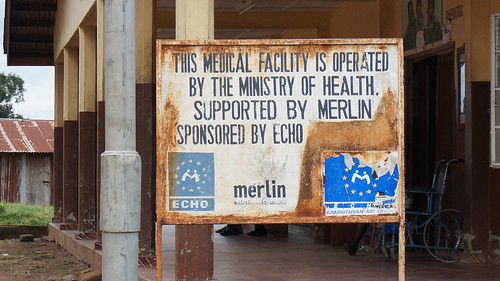 The district of Kailahun, in eastern Sierra Leone, bordering Guinea, is home to this 88-bed largest Ebola treatment and isolation centre set up by Médecins Sans Frontières (photo on Flickr by ©EC/ECHO/Cyprien Fabre).

This opinion piece is written by Eliza Smith

‘By now, it seems we’ve heard everything there is to hear about the mysterious bloody disease called Ebola: heartbreaking tales of loss and heroism, news of ground-breaking science to find a cure, reports of panic and much misinformation.

‘But there are three simple, if unpalatable, truths that we aren’t hearing enough about.

‘First, this is not a particularly mysterious disease.

‘It’s one of many haemorrhagic fevers caused by well-researched RNA viruses, including Lassa, Crimean-Congo haemorrhagic, dengue (‘break bone’) and yellow (jungle) fevers. All of them can cause similar symptoms in humans: fever, increased tendency to bleed and often death. 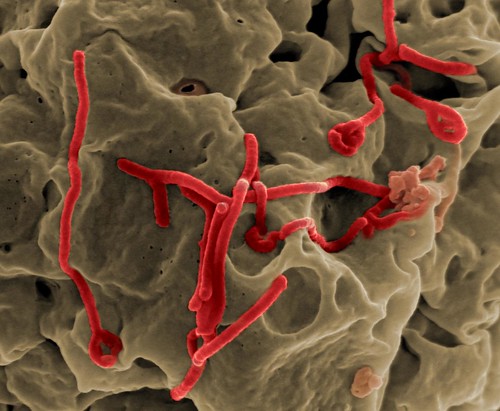 ‘While we still have a lot to learn about the Ebola virus in particular, we know enough about how diseases are transmitted to make some educated speculations and recommendations. . . .

[W]ildlife and livestock often play the middle-men in transmission to humans. . . . For Ebola, there’s evidence that the middleman is a non-human primate that humans come into contact with by harvesting bush meat. For Ebola, it isn’t a mystery that better understanding of the bush-meat trade and discussions on ways to provide alternative sources of protein to the people in this region would go a long way in preventing future outbreaks and other similar diseases waiting to emerge.

‘Furthermore, for over ten years now, ‘One Health’ and ‘Ecohealth’ movements, which seek to prevent or control disease risks generated at the human-animal-environment interface, have provided evidence for how the increased emergence of such multi-host or zoonotic diseases are linked to the changes in the way we use land.

‘This leads us to the second truth—that the current Ebola outbreak in West Africa is not at all surprising. . . . These people have been living with diverse disease hosts, vectors and threats for millennia.

‘As larger, more food-insecure and unsettled populations of people following traditional cultural practices push further into these forests in search of food and income sources, it is only a matter of time before Ebola and other animal-to-human diseases emerge and re-emerge.

‘Detecting initial cases and controlling subsequent transmission is difficult in societies here, where there is a dearth of healthcare infrastructure, government assistance and education campaigns and where strong cultural beliefs remain. Add to this a “first time experience” for a region facing such challenges, and you have a recipe for the largest Ebola outbreak in history.

‘The last truth is the most difficult to hear. Epidemiologically speaking, Ebola should not be a terrible disease. Historically, Ebola outbreaks have affected few people and should be easy to control with best practice. This is in stark contrast to the plethora of neglected diseases plaguing people in these regions and aerosilized infectious agents like bird flu. . . . 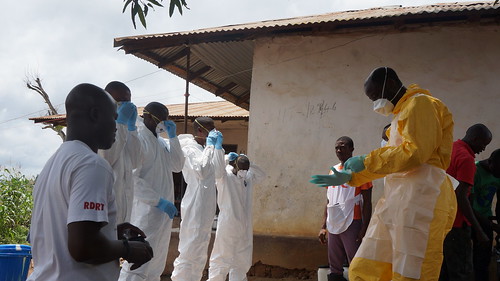 The (many and real) heroes of the battle against Ebola: health care workers in all the effected countries (photo on Flickr by ©EC/ECHO/Cyprien Fabre).

‘It looks like this disease is not going to go away any time soon.

‘But surely we can extract some good out of this devastation.

Let’s not waste this opportunity. Let’s use our fears constructively and move the issue of poverty up the global political agenda. Let’s focus our attention and investments on understanding and addressing the conditions that enable these ever-evolving and ever-increasing infectious diseases to create economic and societal havoc. . . .

‘[T]he foundation of these efforts should be . . . a holistic and preventative “systems approach” approach.

‘As we acknowledge the victims, the dead and the living, who have placed this challenge at humanity’s doorstep, it is for the rest of us to pick it up.’

Eliza Smith is an Australian veterinarian living and working in East Africa with the International Livestock Research Institute (ILRI), a member of the CGIAR Consortium. Her current work involves investigating the epidemiology of Ebola virus. She works in ILRI’s Food Safety and Zoonosis program, led by veterinary epidemiologist Delia Grace.