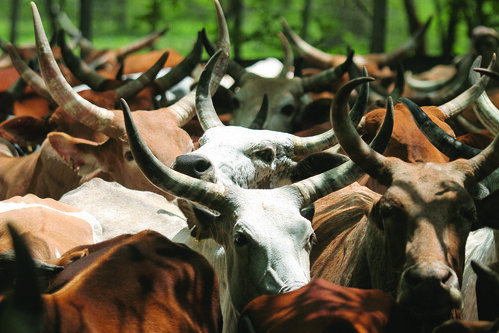 Is it OK to keep eating meat? Or even milk, cheese and eggs?

‘It’s almost guaranteed that this topic will come up whenever dinner table conversation turns to sustainability. Livestock production has been implicated in many of our biggest environmental challenges, from climate change to deforestation to the critical state of many coastal ecosystems.

‘At the same time, animal-sourced foods are excellent sources of protein and other nutrients essential for mental and physical development, especially in young children; not to mention being in high demand among the burgeoning middle classes of emerging economies.

‘So, how do we reconcile our nutritional needs and our taste for animal-based foods with environmental sustainability?

This year’s report by the UN High-level Panel of Experts on Food Security and Nutrition (HLPE), which will be discussed during the 43rd session of the Global Committee on Food Security (CFS) in Rome from 17th to 21st of October 2016, explores the role of the livestock sector in sustainable agricultural development and in food and nutrition security.

Ahead of the CFS, SIANI spoke with Delia Grace—a veterinary epidemiologist at the International Livestock Research Institute (ILRI) and a member of the HLPE livestock project team—about the so-called omnivore’s dilemma, the critical issues in livestock production around the world and a vision for policy-makers who will be implementing the HLPE’s recommendations.

‘SIANI: So should we stop eating meat to slow climate change and environmental degradation?

‘[ILRI’s Delia Grace]: There’s a tendency to look for simple black-and-white solutions. But once we start to explore these issues in depth we find out that they’re not as simple as that.

‘When it comes to meat, we can say that some people eat too much of it and, perhaps, the wrong type, and it would be good for the planet and for them to eat less. But there are also many people who do not eat enough meat, or enough high-quality protein that they can easily get from their local environments.

‘At the moment there are around 2 billion people in the world who suffer from micronutrient deficiency. This means they may have low iron, low zinc, low B vitamins. And these micronutrients are very rich in animal-sourced food, but are not particularly rich in plant-based foods. And so for those people we certainly don’t want to send out the message “stop eating meat”.

‘There are fairly comprehensive studies from Africa in which they asked mothers what their infants had eaten in the last 24 hours. These show that less than one in five kids under the age of two are getting milk each day and less than one in three are getting meat. These kids are mainly growing up on a diet based on corn and water and this is not doing them any good; many of these kids are stunted. . . .

So, it’s a very nuanced message.

Livestock is also the fastest-growing agricultural sector worldwide, while other agricultural sectors are more static. That is why it is of such a big interest to the global food security, and especially for the HLPE report series which is very much directed towards the future.

The High Level Panel of Experts on Food Security and Nutrition (HLPE) was established in 2010 as the science-policy interface of the UN Committee on World Food Security (CFS).  The HLPE aims to improve the robustness of policy making by providing independent, evidence-based analysis and advice at the request of CFS.