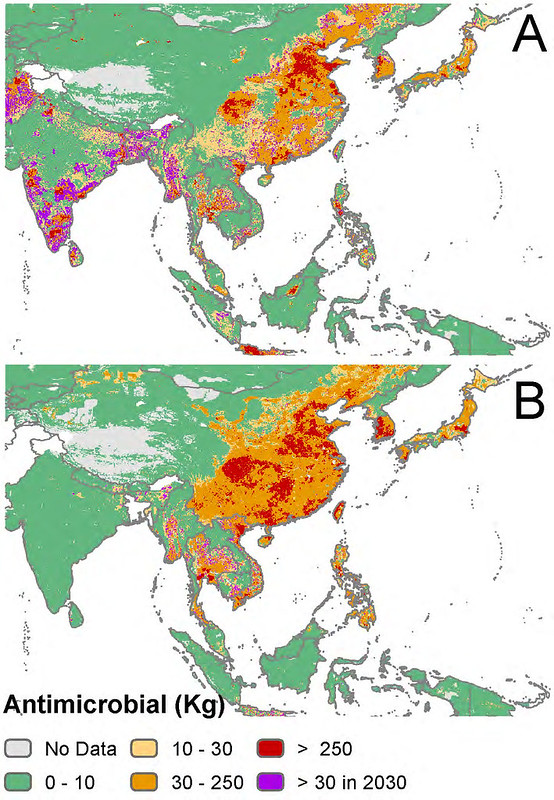 Antimicrobial consumption in chickens (A) & pigs (B) in 2010. Figure from PNAS paper: Global trends in antimicrobial use in food animals, published 20 Mar 2015 by Thomas Van Boeckel, Tim Robinson and others.

As reported in a scientific paper published 20 Mar 2015 in the Proceedings of the National Academy of Science (PNAS), Global trends in antimicrobial use in food animals, worldwide antimicrobial consumption is expected to rise by a staggering 67% between 2010 and 2030.

Use of such drugs has grown as livestock systems intensify around the world to meet a growing world demand for meat, milk and eggs, particularly in developing countries.

Widespread use of these drugs to prevent disease in farm animals or to promote their growth is a growing concern. Inappropriate use may contribute to growing microbe resistance, which makes these drugs ineffective in treating infections in people as well as animals. In addition, residues of the drugs used in certain types of livestock production systems can harm consumers of animal-source foods.

Tim Robinson, of the International Livestock Research Institute (ILRI), is one of a group of scientists, including lead author of this paper, Thomas P Van Boeckel, of Princeton University, leading a global effort to map the implications of the ‘livestock revolution’ now under way in the developing world. For Robinson and his colleagues and partners, this study presents regulators with a knotty problem: They want to rein in a practice common in some countries that could push us closer to a time when common, treatable infections become a death sentence. But they want to do so without intensifying malnutrition, poverty and livestock diseases among the one billion poor people in the world who depend on livestock for both food and income—and actually need more and better drugs to keep their farm stock alive and productive.

Delia Grace, a veterinary epidemiologist colleague of Robinson’s at ILRI, was recently asked by the UK Department for International Development (DFID) to write a paper, now under external review, on antimicrobial resistance linked to agriculture. She cautions that

European countries have stopped growth promotion without major impacts, because they have good husbandry, management and a less ‘disease-ogenic’ environment. Even then some countries saw initial increases in antimicrobials used for treatment and prophylaxis. It is quite likely that stopping growth promotion would be much more catastrophic for developing-country agriculture and may paradoxically increase antibiotic use. It is not that it can’t be done, but it is simplistic to say ‘just do what Europe did’.

In poor countries, regulations are often in place but implementation is completely lacking. Unless this is addressed, it is pointless to harmonize regulations or to attempt to phase out drug use. 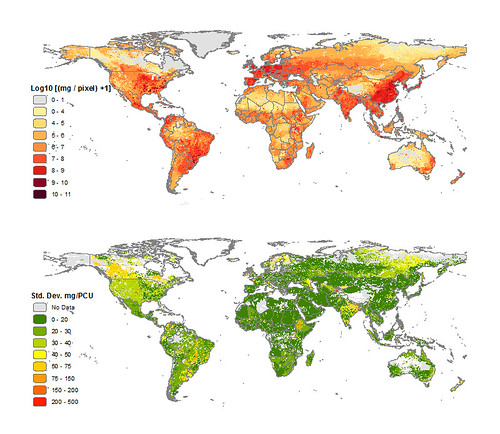 Global antimicrobial consumption in livestock in milligrams per 10 km2 pixels (top) and average SD of estimates of milligrams per PCU (bottom). Figure from PNAS paper: Global trends in antimicrobial use in food animals, published 20 Mar 2015 by Thomas Van Boeckel, Tim Robinson and others. 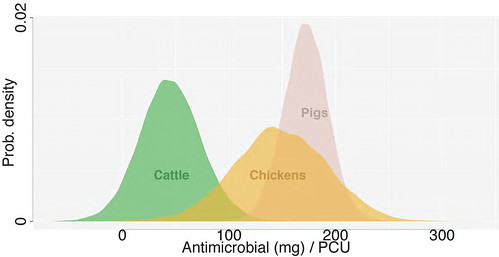 To read more, check out the following articles:

ILRI News Blog: First global map of the rising use of antimicrobial drugs in farm animals published in PNAS, 25 Mar 2015

ILRI Clippings Blog: Livestock in poor countries need drugs to stay alive and productive, but how to avoid the rise of ‘super bugs’?, 23 Mar 2015

Increasing food production for the estimated 805 million people who go to bed hungry every night will require a new approach that is less reliant on intensive, antiobiotic-fuelled breeding, [Tim] Robinson said.

‘Poor livestock producers aren’t responsible for this problem, it’s the big firms rushing to meet demand in the growing cities,’ he added.

But the poor will be worst affected if resistant bacteria transfer to humans more often, he said, because they will be the least able to afford the bigger and more frequent doses of drugs required to fight infections.

The problem of antibiotic-resistant bacteria, already an ‘apocalyptic’ threat, is poised to get worse. The reason? The world’s hunger for meat.

In the first estimate of its kind, researchers calculate that farmers globally feed 63,000 tonnes of antibiotics to chickens, pigs and cattle every year – and that will climb by 67 per cent, to 106,000 tonnes, by 2030.

Antibiotics fed to livestock encourage the evolution of antibiotic-resistant bacteria, which have repeatedly been linked to human infections. . . .

Worryingly, China’s consumption will double by 2030, along with that of India, Brazil and South Africa. Consumption will more than double in countries such as Indonesia, Nigeria and Peru.

The estimates are probably conservative, says [Tim] Robinson, due to simplifications in the model.

‘The invention of antibiotics was a major public health revolution of the 20th century,’ said Ramanan Laxminarayan, the study’s senior author and Director of the Center for Disease Dynamics, Economics and Policy, in a statement. ‘Their effectiveness — and the lives of millions of people around the world — are now in danger due to the increasing global problem of antibiotic resistance, which is being driven by antibiotic consumption.’

According to the study — carried out by researchers from the CDDEP, Princeton University, the International Livestock Research Institute and the Université Libre de Bruxelles –  two-thirds of the projected increase in antibiotic use is because more animals are being raised for consumption.

The Atlantic: The antibiotics problem in meat, 23 Mar 2015

A new study published in the Proceedings of the National Academy of Sciences forecasts the geography of antibiotic overuse in the future. According to the study authors, the next big threat will come from middle-income countries like Brazil, Russia, India, and China, where a burgeoning consumer class is starting to prefer more meat in their diets, and where large-scale farms will try to meet this demand as cheaply as they can. . . .

The increase will largely be driven by chicken and pork, rather than cattle. Chicken and pigs are easier to raise quickly in tight spaces, whereas cattle herds take a while to build up, explained Timothy Robinson, principal scientist at the International Livestock Research Institute and an author of the study. . . .

‘Antimicrobial resistance is a tragedy of the commons, but with more direct individual effect than climate change,’ said Thomas Van Boeckel, an ecologist at Princeton University and the study’s lead author. ‘By playing your part you do reduce your risk of infection. Although not completely.’

In order to preserve antibiotic effectiveness entirely, he added, ‘we need to rethink how we raise livestock.’

The widespread practice of pumping livestock with antibiotics to boost their quality is leading to the creation of more strains of antibiotic resistant superbugs endangering humans.

The practice, which is prevalent in developing countries, is dramatically increasing the risk of creating more drug-resistant “super bugs,” scientists warned. Choosing to remain on this path might result in a time when ordinary infections could become a death sentence because they’ll no longer respond to antibiotics. . . .

China’s livestock industry is expected to account for one-third of the world’s antibiotics. The five countries with the largest projected increases in antibiotics consumption are Myanmar (205 percent), Nigeria (163 percent), Peru (160 percent) and Vietnam (157 percent).

Systematic use of low doses [of antibiotics] on livestock is creating ‘perfect conditions to grow resistant bacteria’ [said ILRI’s Tim Robinson]. . . . The study by experts from Princeton, ILRI and the National Institute of Health is the first to measure global antibiotic consumption by livestock.